DUBAI: Middle East carriers await official approval to launch Baghdad flights. Current indications point to resumption of commercial flights to Baghdad this month or the next. However, the resumption of operations may be delayed due to certain complexities, including lifting of economic sanctions. The European Union is now seeking more powers for the United Nations in the reconstruction of Iraq. Efforts are on to spruce up Baghdad International Airport for modern aviation activities. Once the sanctions are lifted, Baghdad airport will serve as the node for major communications activities - including civil supplies, passenger and cargo traffic, said a Gulf News report.

Training professionals of various companies were recently briefed on how their management could benefit from the programmes. Abdul Aziz Al Ali, Emirates' director of human resources, said the problem solving and decision making programme of Kepner-Tregoe courses have been attended by over 300 managers in the Emirates Group.

DUBAI: Indonesian manufacturer Warisan is planning to launch several new design concepts at The Hotel Show 2003 in Dubai. The company believes show, taking place at Airport Expo Dubai from May 19 - 21, can help it become an increasingly important force in the Middle East hospitality sector. Vanessa Robinson, managing director of the Bali-based manufacturer and designer of furniture, lighting and accessories, said: "The Hotel Show provides us with an ideal platform from which to develop our business on a long-term basis in the Middle East, where billions of dollars are earmarked for hotel development and refurbishment."

Passenger movement up at DIA

DUBAI: Passenger movement at Dubai International Airport in the first quarter of 2003 registered at 4.28 million showing a growth of 13 per cent as compared with 3.8 million over the same period last year, while Dubai Cargo Village registered a phenomenal 26 per cent growth having handled a total of 208,071 tonnes of freight as compared to 165,110 tonnes during the same period last year. 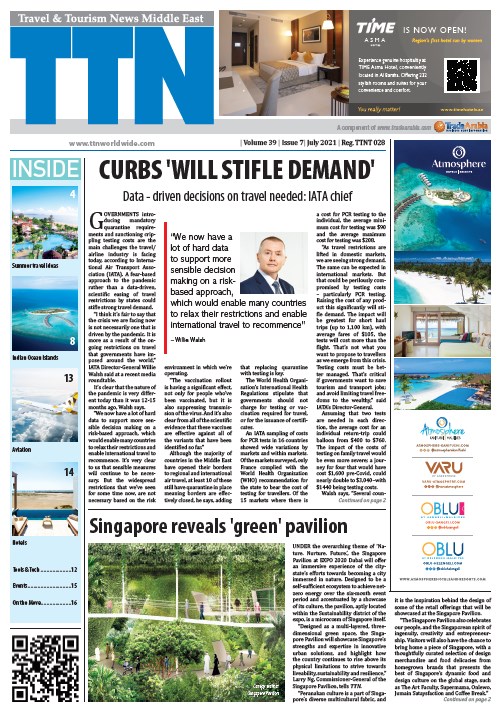